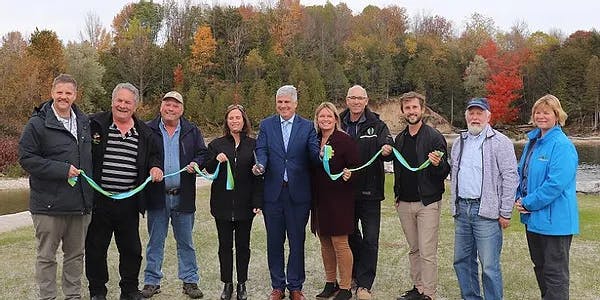 The Municipality of Brockton has completed the partial removal of the old Truax Dam.

Brockton Mayor Chris Peabody says the work done by the Lake Huron Fishing Club and Bruce Power on the project has resulted in a much nicer area for the municipality. The $600,000.00 project was financed by Bruce Power as part of its environmental stewardship program.

“They’ve got a little series of rapids where the dam used to be, as well as a promontory out in the middle of the river which will be a picnic area, a grassed area, so it looks fantastic and it gives you a great view of the river.”

Mayor Peabody says it’s a huge improvement over the rundown state of the old dam, which had become a safety hazard. He also says he had been floating the idea of re-purposing the dam area for nearly 20 years, and the changes have made a much better fish habitat.

The mayor notes that the work of the Lake Huron Fishing Club was instrumental, as well as major support from Bruce Power’s environmental stewardship program, which funded the whole project.

“Bruce Power’s contribution was $600,000 and we’re very thankful for that, we couldn’t have done it without them. There would have certainly been community opposition to those kind of tax dollars, so Bruce Power’s input was fantastic and they were with us the whole way.”

In terms of further development, Mayor Peabody says the municipality wants to first monitor how the river bed rehabilitates itself for the first few months before doing anymore upgrades. He says they may have to plant some trees and vegetation to help the natural flow of the river, which is currently very low.